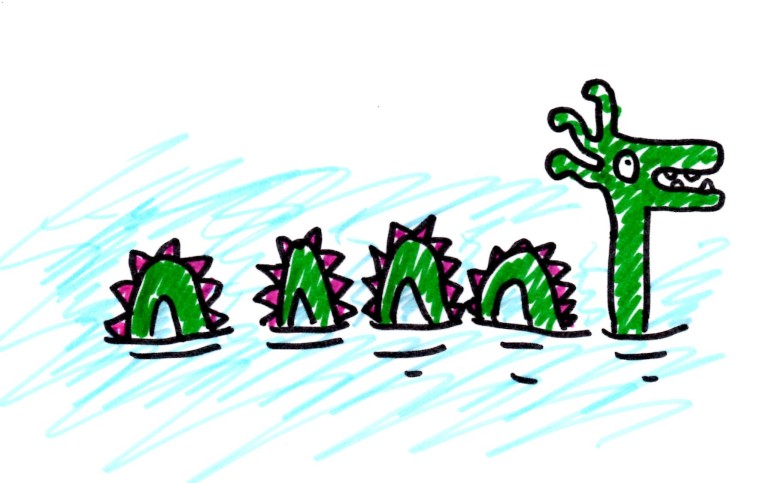 OK, so I had to lay down some ground rules because it turns out there are waaay more lake monsters than you might imagine. There are certainly more than I imagined because I imagined there would be like six or something. Nessie, a couple in America, one or two in a jungle somewhere, a really cool Japanese one, and then maybe an Australian one or something. It turns out there are stacks of the things and they are everywhere. Pretty much any body of water bigger than a puddle will have some sort of legendary creature connected to it. I haven’t got the time to assess all that shit especially when some of them are just made up anyway.

So… I am only counting Lake Monsters that are:

Which leaves six and eliminates the Loch Ness Monster, pretty much the only one anyone has heard of, which undermines my rules magnificently. I’ve already wasted enough time on this garbage though, and I’m not staring again for anybody, so let’s plough on, yeah?

Jesus. I’ve got a masters in creative writing. What am I doing with my life?

THE SIXTH BEST LAKE MONSTER IN THE WORLD IS… EACHY

Predominately seen in the Lake District (making it perhaps the most middle class of the Lake Monsters) Eachies are largely humanoid but a bit bigger and quite slimey. That’s scary enough to make the list in my opinion. (Unlike the Muc-sheilch, which apparently translate to turtle-pig, which just sounds rubbish. Sorry, Scotland.) They aren’t cool enough for you to make a special trip to see one, but it’s worth keeping an eye out for one if you are passing the fish counter in a Booth’s.

THE FIFTH BEST LAKE MONSTER IN THE WORLD IS… SHARLIE

Which has a stupid name, and was probably just some logs, but beats Eachy because at least it is actual monster shaped.

THE FOURTH BEST LAKE MONSTER IN THE WORLD IS… OGOPOGO

Fifty feet long and shaped like a big serpent, Ogopogo is your classic lake monster but with a cool name.

THE THIRD BEST LAKE MONSTER IN THE WORLD IS… MOKELE-MBEMBE

Mokele-mbembe translates as “one who stops the flow of rivers”. THAT is why shit like The Flat Lake Monster and Nessie won’t fly with me. A monster should have a proper name. A name that inspires awe and fear. If you’re first concern when naming a monster is getting the name of your lake in there somewhere, for marketing purposes, then good luck to you and everything pal but you don’t get to be on this list. Soz.

Apparantly, creationists have been searching for Mokele-mbembe for years because it’s existence would disprove evolution. I mean, it wouldn’t, but at least it gets you out the house, right guys?

An expedition to find Mokele-mbembe in 2018 failed to find any evidence of its existence but did discover a new sort of green algae, which is a bit like when you go to IKEA to buy a sofa but come back with a couple of scented candles and a toilet brush. We’ve all been there.

THE SECOND BEST LAKE MONSTER IN THE WORLD IS… MISHIBIJIW

Mishibijiw are underwater panthers. They are the most powerful creatures of the underworld and they are covered in spikes and stuff. They can talk and (I think) kill people with their minds if they try to take their copper from them. It’s a bit confusing because they are part of the legends of several cultures and so the stories about them overlap and partly contradict each other but, ok, do you remember that Steven Seagal film, On Deadly Ground? Well, I think they are a bit like that but with spikes instead of using a pop bottle as a silencer. Cool, eh?

THE BEST LAKE MONSTER IN THE WORLD IS… GAASYENDIETHA

Known as ‘the meteor dragon’, Gaasyendieth flies on a trail of fire. And, oh yeah, it also breathes fire. Frankly, all other lake monsters look a bit pathetic compared to this guy. Breathing actual fire. Now that’s what I call a proper scary monster.